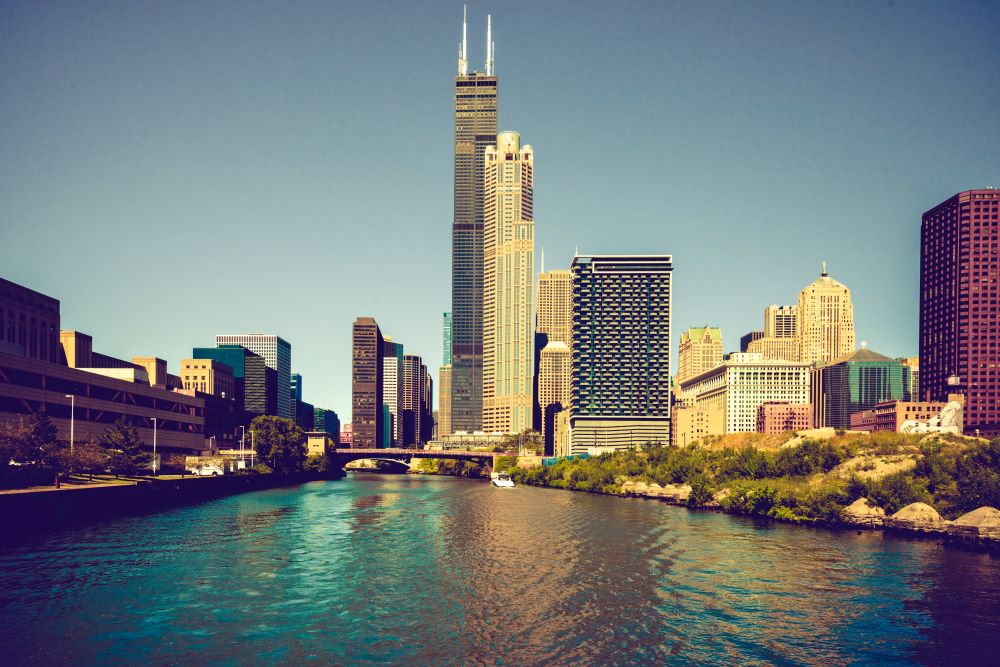 Located on the Coast of Michigan Lake, Chicago is one of the most popular cities in the United States. Chicago's got the architectural splendors, exceptional museums, electrifying entertainment, and eclectic cuisine, all of which will leave you asking for more. The cultural vibe is dynamic and inclusive and Midwestern to the core. Let's explore some fun facts about Chicago's history, attraction, culture, and the city itself.

How did Chicago get its name?

The name Chicago was derived from the Miami -Illinois word "shikaakwa" meaning "smelly onions." However, the French explorers that used the word pronounced it as "Checagou." It was later used in a French article to describe the field of onions since garlic and onions were commonly grown in the city.

Chicago is also called the Windy City, a nickname attributed to it by the newspapers of competing cities to refer to the weather of Chicago as well to the boastful nature of its citizens and politicians.

Chicago and the history of the Spray Paint Can

In 1949, a salesman from Chicago, Edward Seymour, heeded his wife's advice to use a makeshift spray gun for storing as well as spraying paint, and the first color that came out of the spray can was aluminum. He found that compressing the paint in a can made a nice coating, and thus, the spray can was born. Seymour built his company, Seymour of Sycamore, for manufacturing spray paints. Although Seymour receives credit for inventing the spray paint can, there are claims that some two men from Chicago are responsible for developing the spray paint itself.

Land of the Twinkies

Since their invention in the 1930's, Twinkies have been a staple and a model cake snack for Americans. Twinkies was invented by James Dewar, who worked at the Hostess bakery in Schiller Park. The bakery made shortbread fingers using strawberry and hence could produce only for six weeks during the strawberry season. Dewar used the otherwise unused shortcake pans and created the Twinkies using banana filling in 1930 to make shortbread cakes available all the year-round. During WWII, the banana filling was replaced by vanilla cream due to the shortage of bananas.

The Only Backward Flowing River in the World by Artificial Procedure!

River Chicago flows across downtown and is the subject of a fascinating fact. The Chicago River makes its way through several canals and waters systems and is the only river in the world that flows backward. This was, however, a man-made origination that created a reversal procedure to ward off the sewage from the water supply from the Michigan Lake. The entire process was hailed as an engineering marvel.

There are more rivers in the world with flow reversal, but natural events cause all of them. The Amazon River flows backward due to the formation of the Andes mountains.

Chicago is home to the United State's First Blood Bank

This is one of Chicago's fun but significant facts. The first blood bank in the world was opened in Chicago. In 1937, Dr. Bernard Fantus started a blood preservation laboratory at the Cook County Hospital, Chicago. However, he was not happy with what he called this entity, so he instead named it the blood bank where people could donate and borrow blood. The concept soon caught on, and several hospitals throughout the United States started establishing their blood banks.

Although the world's first blood donor service was linked to the British red cross in 1921, Fantus originated the term blood bank and established the first blood bank in the United States.

You can see four states from the Willis Tower in Chicago

The Sears Tower, more commonly known as the Willis Tower, was the tallest building in the world for more than 20 years. Presently, it is considered the second-highest building structure across the Western Hemisphere. It stands tall at 110 stories and provides a view of four neighboring states, including Illinois, Michigan, Indiana, and Wisconsin. The elevator at the Willis Tower is one of the swiftest in the world and moves at a speed of 1,600 ft per minute.

The Columbian Exposition and the White City

The Columbian Exposition of 1893 was conducted in Jackson Park, Chicago. The buildings showcased in the exposition were so spectacular that they started a drive called City Beautiful that featured the Beaux-Arts visuals in the planning of American cities. This exposition gave birth to yet another name of Chicago known as the The White City owing to the white color of the Beaux-Arts based structures.

First all color Television in the world

While John Logie Baird was said to have given a demonstration of the first color television transmission in 1928, the first all-color television in the world is credited to WMAQ-TV station in Chicago. The TV station became the world's first all-color station in the year 1956 after several months of working on the innovation. The broadcasting day was popularly referred Tomas "C-Day" and considered a great break sat the black and white curtain. At the time of transmission, color reproduction on the screen was less than perfect, and light blue colored shirts appeared as white. The first significant color transmission on the station was the rose bowl parade of 1954.

Gotham City, home of the legendary comic character, Batman, is modeled on the city of Chicago. The architecture and visuals have a striking resemblance, and some of the Batman movies were shot here.

A popular kid and adult adventure, the Ferris Wheel ride was invented in Chicago. It was first set up by Gale Ferris Jr. in 1893. The wheel was around 150 ft. in height in the air and featured in the Columbian Exposition Fair. Though the Ferris Wheel was envisioned to match the Eiffel Tower in Paris, the wheel was only able to achieve this due to its height. The Ferris wheel ride became hugely popular during its time, and though the actual wheel is no more in existence, we still owe this adventure to a Chicago resident.

Longest MLB Game in the World

Baseball is a beloved sport in Chicago, and most of them are White Sox fans. It comes as no surprise then that the longest professional baseball game in history was played between the Milwaukee Brewers and the Chicago White Sox in Chicago at the Comiskey Park in the year 1984. A total of 25 innings were played through eight hours and six minutes, where the Chicago White Sox eventually beat the Milwaukee Brewers.

The Taste of Chicago is the World's Largest Food Festival

Chicago is a food paradise, and the people are tremendous food lovers. The Taste of Chicago is a testament to that fact. This is the largest annual food festival to be organized outdoors at Grant Park in summers. The Taste of Chicago tradition has been ongoing since the 1980s and is a platform for serving the best gourmet experience. Foods on offer include hotdogs, Cheesecake, barbecue ribs, and many more mouth-watering delicacies. The festival features musical and other artistic performances that keep the crowd entertained as they savor the juiciest of the dishes.